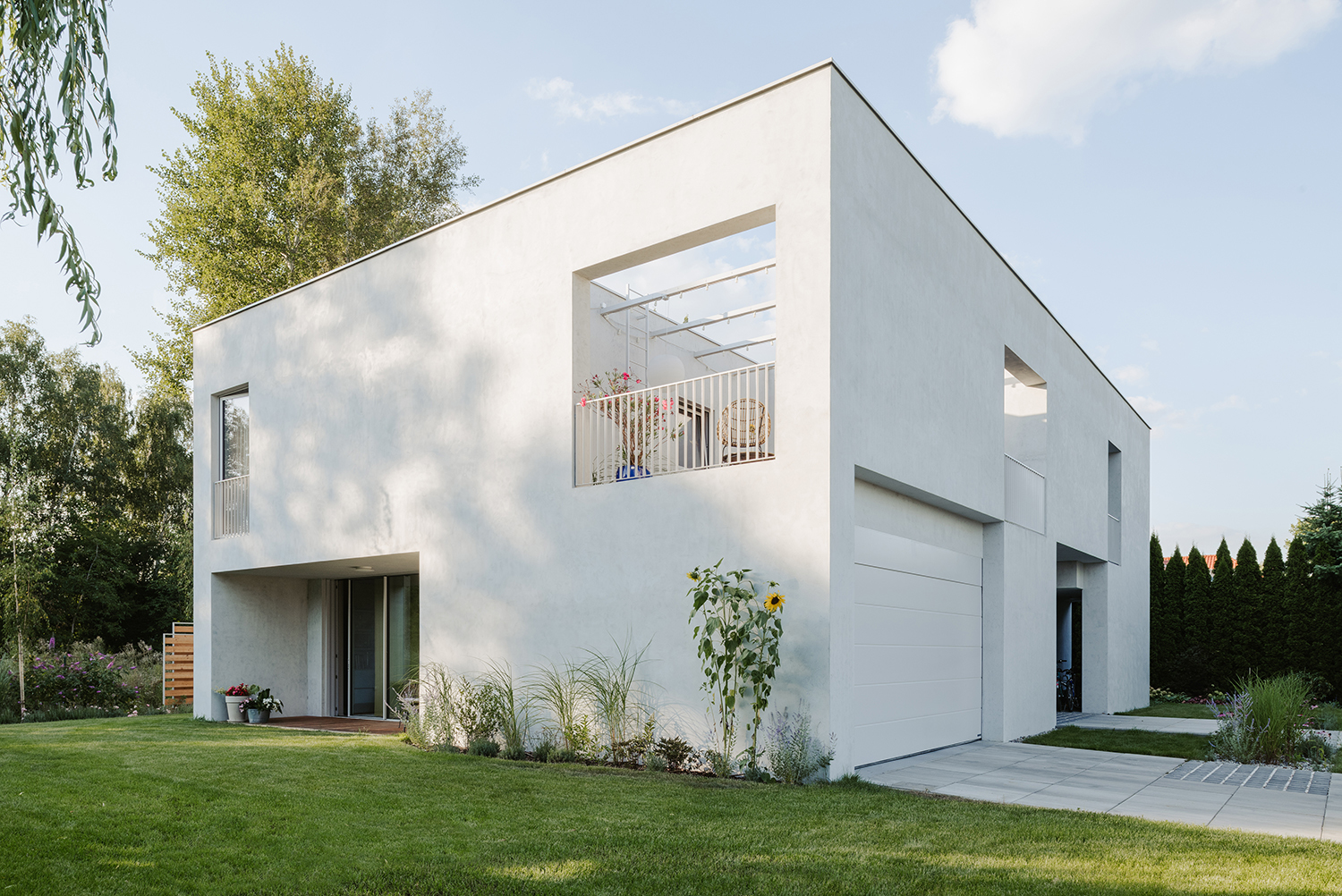 During the pandemic and restrictions associated with it, there was a renewed appreciation for lots and houses away from the city center. Many satellite settlements with their advantages such as cleaner air, less crowded streets, greenery, have become an alternative to cramped apartments in central districts.

The project “dom m7” (“house m7”) was created just before the mysterious epidemic outbreak and on a plot located in a village near Warsaw. In this difficult time, the investors could appreciate this place and use the spaces and functions tailored to their needs. The architects designed the building on a medium-sized rectangular plot of about 800 m2.

The property on which the development was built is slightly hidden, located in a strip between several lots of a similar size with fairly typical houses on them. They can be accessed via a no through road with a barrier from the main road. This situation allowed the designed house to have no fence in front and on two sides, which gave a local and open character to the place.

The design process began by talking to the household members and identifying their needs. This allowed us to determine the function of the house – expanded due to the number of residents. The interior patio became the unifying point for all the needs in the house. The patio makes it possible to see the greenery practically from every place in the building: from the living room, kitchen, corridor near the bedrooms and from the entrance to the building.

What is more, thanks to the patio and openings in the living room in the seemingly closed concrete block, well-lit interiors with large glazing were obtained and at the same time the intimacy inside was maintained. Viewing axes were preserved throughout the ground floor of the building. Thus, you can look directly at the kitchen from the
living room, and entering the building you can see the greenery behind the facility.The entrance arcade has an interesting and unexpected function. During the lockdown, when it was not possible to move too much on the roads, the residents could train for example cycling (trainer) or rowing, experiencing the current weather outside, while contemplating nature and the views.

The form of the building was to be simple and neutral, so its shape relates to the plot. It is a cuboid with façades inspired by the texture of concrete in a grey shade. The only detail used in this design is simple steel flat bar railings. The window recesses, together with the discreet aluminium joinery so that the surface of the glazing is as visible as possible, contrast with the rough façade. The house is a one-storey building. On the ground floor there is a living area (entrance zone, study, toilet, kitchen with facilities and a living room). The garage zone is connected to the boiler room. On the first floor private rooms of the house are located (parents’ bedroom with a wardrobe and a bathroom, laundry room, children’s rooms and a guest room).

On the first floor there is also a large terrace accessible to all users of the building, where we provided an area for the preparation of additional light meals, so that the kitchen on the ground floor does not have to be used.

The building is of mixed structure, partly in reinforced concrete and partly in masonry with a flat roof. The façade is made of concrete. Windows with narrow aluminium frames and steel elements are painted grey. 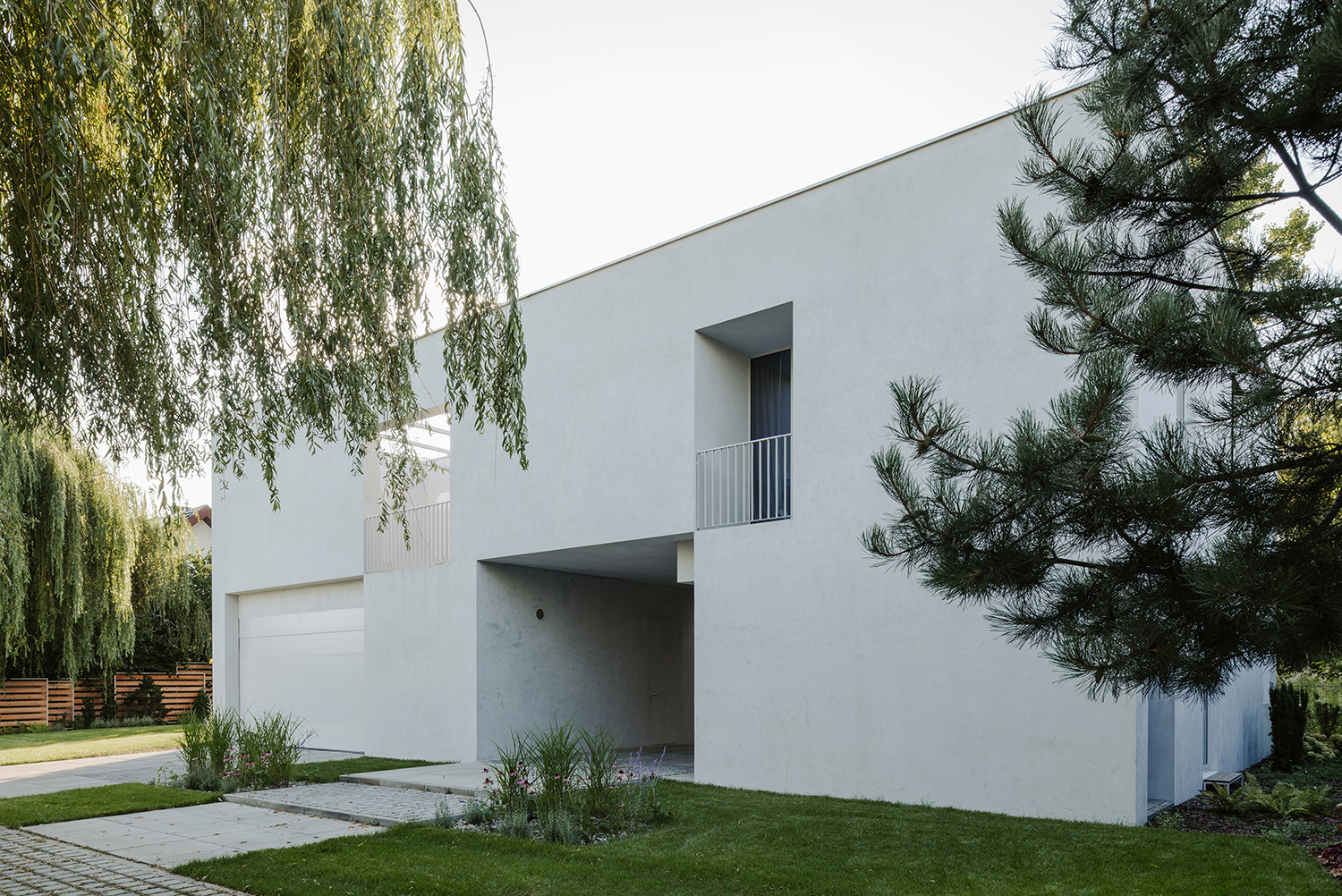 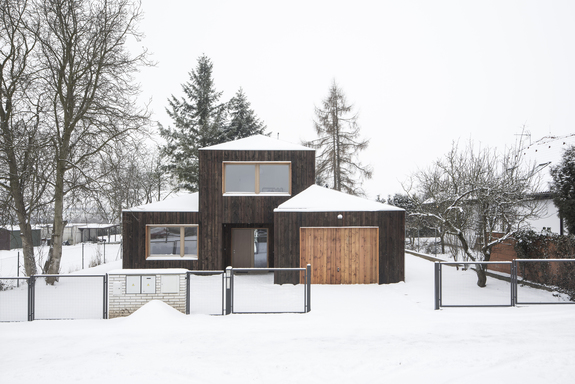