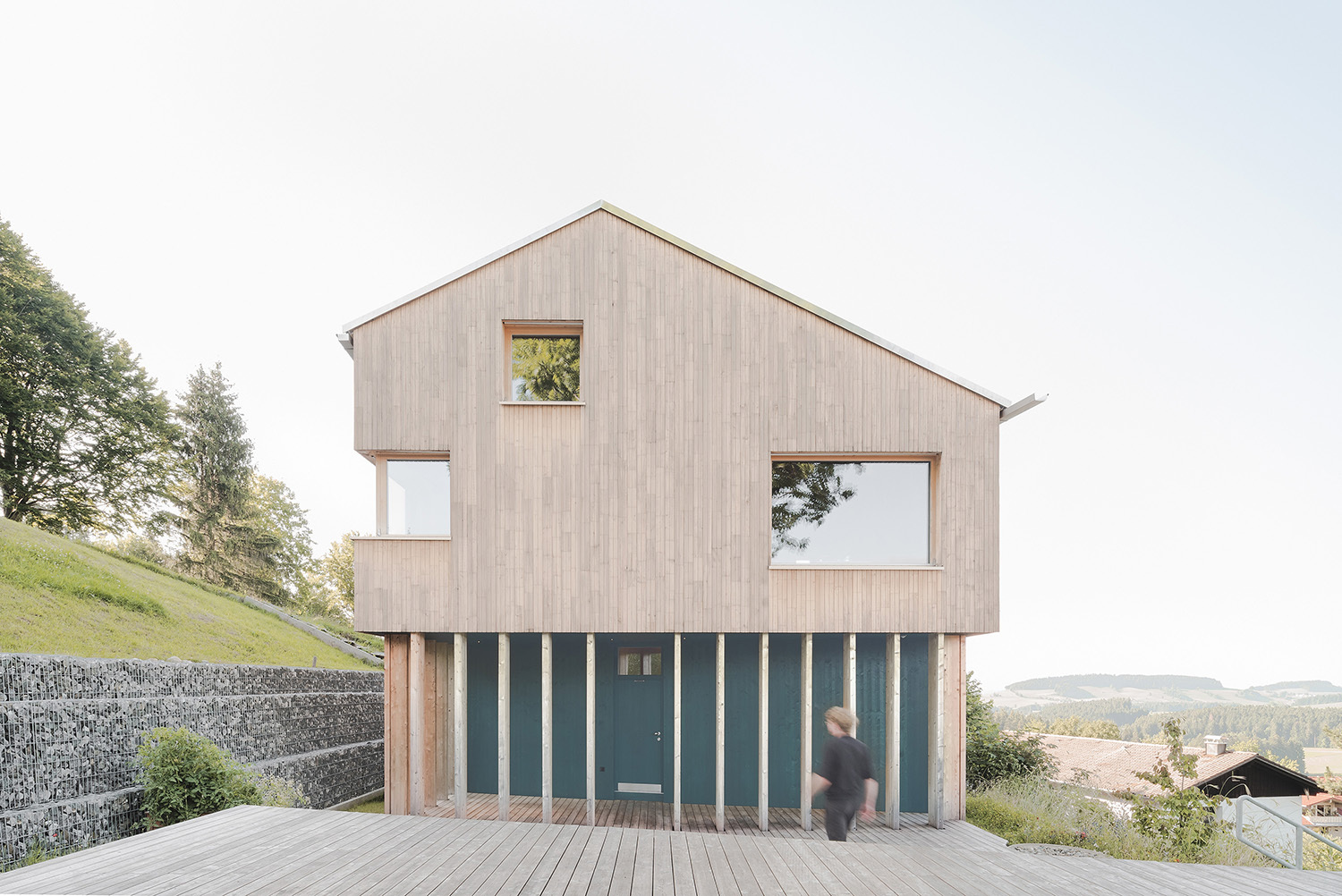 With Haus S, a couple from Berlin wanted to realize their vision of a house that grows.
Planned in a first step as a holiday home on a small budget, at a later stage it was to be expanded into a retirement residence. Under a roof that was conceived as a kind of
extended raised hide with a fantastic view of the mountains, further floors were to be
added gradually. While these plans for a combination of minimum floor area and maximum height were thwarted by opposition from the local council, a second design met with widespread approval. Downsized by one floor, the revised plans included a large open space and a small annex housing a sauna which seemed to have been carved out of the volume of the ground floor. And in the end, the total height of the house had only been reduced by one meter.

The client had chosen a vacant plot in the center of the village of Irsengund with a
breathtaking view of the Allgäu hills and the Vorarlberg peaks which, due to its location on a steep slope, no one had so far dared to build on. By developing the plot, the new owners made a contribution to necessary rural consolidation. A magnificent old tree was also saved by wrapping the sauna hut round it.

The contribution to rural consolidation and the preservation of trees were not the only
sustainable aspects of the simple timber construction. By dispensing with impact sound insulation, the structural surfaces of the ceilings and floors could be left as finished surfaces, doing without additional layers in the interior construction work. A bivalent heating system, where an air/water heat pump provides the base load and a fireplace stove in the living room takes care of the peak load when the outside temperatures drop, ensures efficient and economical heating without compromising on a cozy atmosphere.

The simple rotation of the roof and interior to the outer walls of the rectangular structure creates an ingenious spatial structure for the living floor under the roof. Not only did this mean that circulation areas were not necessary, but the efficiently designed living space also appears generously dimensioned through the conical opening and cleverly chosen room heights. Wide openings in the façade were avoided in order to deliberately frame the stunning views and at the same time to create a cozy retreat despite the building’s exposed location. 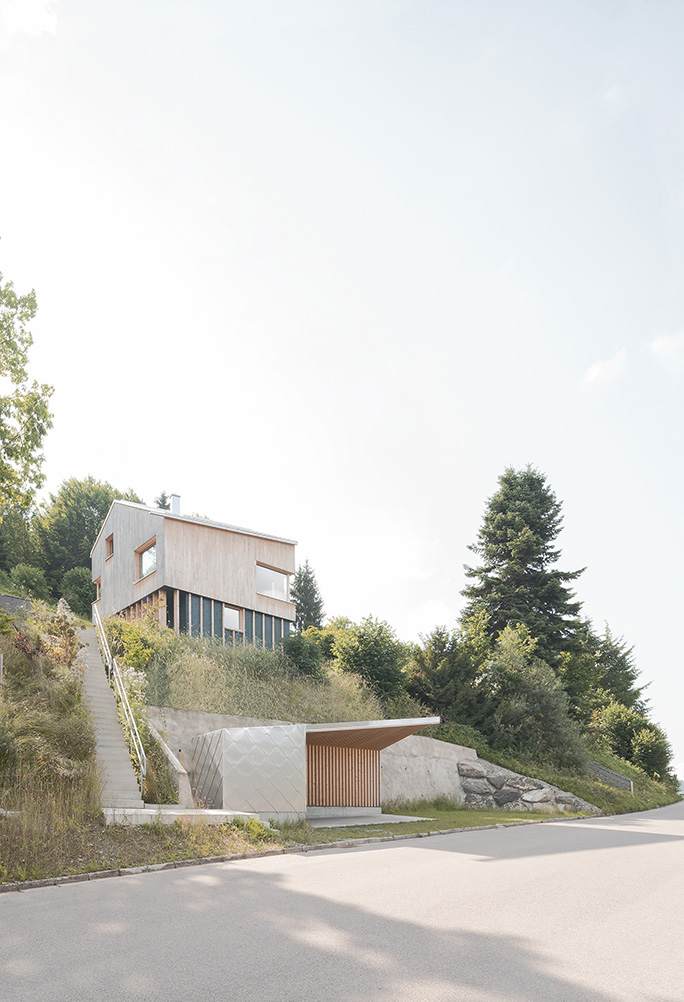 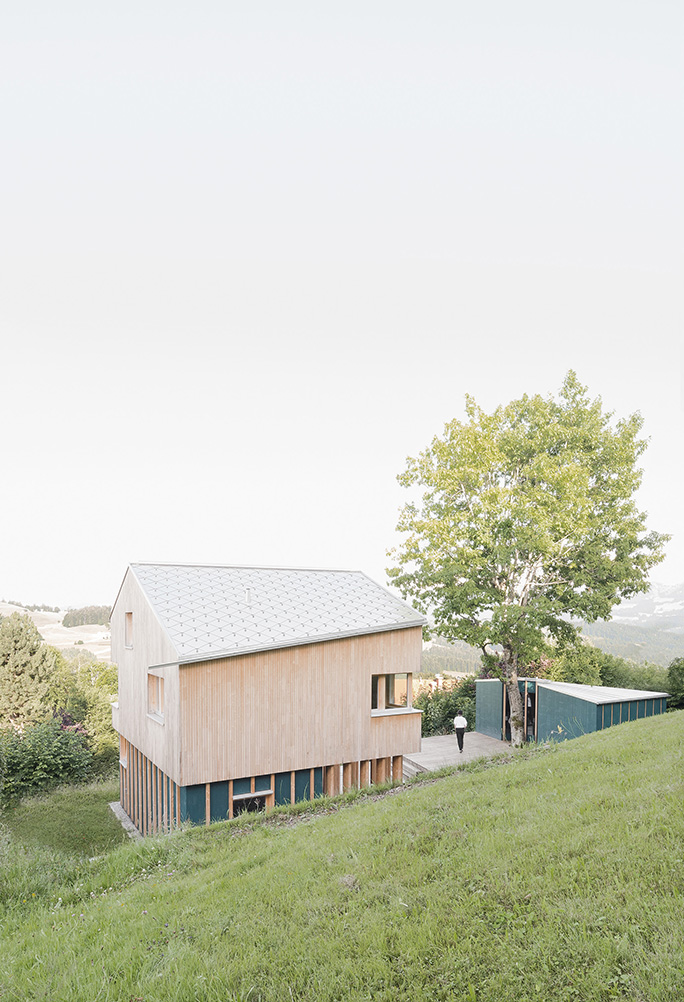 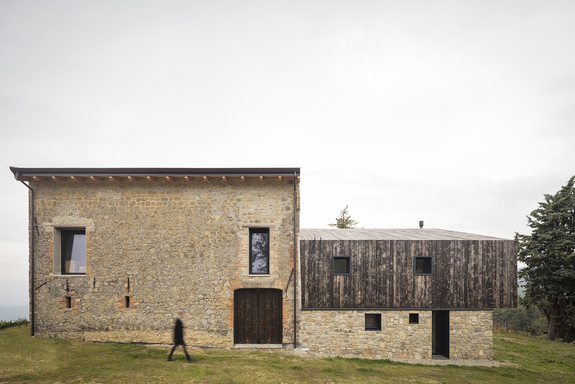 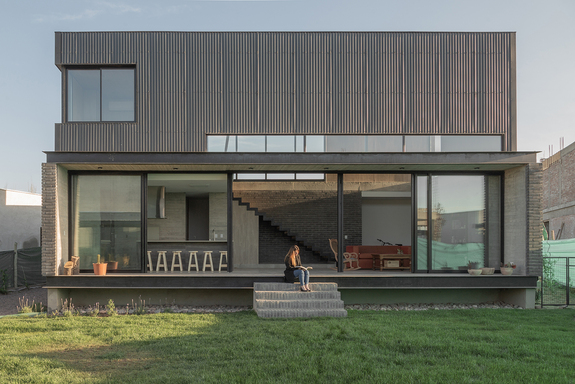